Thought for the Day: "I may be bad but I'm perfectly good at it."
No comments:

War Head will run a laid-back, three-round Warhammer 40,000 Rookies tournament on 12th of February! Prepare for serious fluff warfare and to meet other scarred generals in the familiar War Head Fight Club environment!

The Rookies tournament is first and foremost aimed towards players, who have not previously attended a tournament event or have had a long break between the game editions. Players who participated in our last Rookies tournament are of course more than welcome to join! The event is beginner-friendly and suits hobbyists of every age, as long as they have some kind of understanding of the basic rules and the contents of their armies Codex.

In the event the players will be introduced into the common principles of a basic tournament event, how the points are calculated, how multi-layered scenarios work and so on. Players will receive guidance with rules issues and the Rookies tournament is a great “trial by fire” and a first step into Finnish wargaming tournament scene. This is also a great opportunity to meet new players outside your own gaming circles!

The event aims for entertaining games with an emphasis for 40K's background story and thematic armies. We advise players to bring their neatest models and their best gentleman's attitude; this is not a competitive gaming event but a fluffy occasion. We hope to see the theme of the event in the players' casual army lists and unit choices; for example Warp Spiders and several Psykers should be saved for more competitive events.

The tournament conduct and playing itself should reflect the nature of the event. If you notice a chance to seize an early massacre, maybe pass the opportunity instead so that both players can gain more from the game. Although the event name is tournament, we advise people to just have fun, give each other advise and create as cinematic battles as they can. The prizes are also awarded for other things than the final player ranking.

- There are slots for 18 generals.
- Tournament fee of 15€ will be collected on site.
- All of the models have to be painted, based and wysiwyg in their special options. This means that all pistols and grenades don't have to be visibile on the models, but any specifically bought wargear such as meltaguns and banners should be modeled. Proxies and clearly unfinished models are not allowed. If you're uncertain about your models, contact us and we'll work it out together!
- Prizes are not given out for gaming prowess, but instead for hobby feats and sportsmanship. Categories are:

Players can sign themselves up via mail to contact@gowarhead.com. Players must also deliver their army lists in advance by 10th of February to the same mail address. Include your list in the message, do not add any attachments. We will check the lists and print a personal copy for each player. Please follow a tight format and list only the options and upgrades, no mainstay armament. Examples can be seen here.

- Armies are 1200 points or less.
- Tournament is played with Battle-Forged armies.
- Allowed detachments are Combined Arms Detachment, Allied Detachment and single Formations. Formation compilations such as Gladius Strike Force are not allowed. Factions may also use their own special Detachments. The Fall of Cadia's Castellans of the Imperium is not allowed.
- All GW Codex, Codex Supplement and White Dwarf publications are allowed.
- Forge World units are not allowed this time.
- Allowed Fortifications are Imperial Bastion, Aegis Defense Line and Skyshield Landing Pad, which can take Icarus Lascannon, Quad-Gun and Comms Relay as upgrades.
- Character Dataslates such as Cypher are allowed.
- Super Heavy Vehicles and Gargantuan Creatures are not allowed.
- Warlord Traits are used, Mysterious Objectives and -Terrain are not.
- Death from the Skies Dogfight Phase and Air Superiority are not used.

Players will receive painting score in addition to their battle points. The judging will be arranged during the tournament's lunch break by the organizers. Armies are deployed in a voluntary parade formation on the tables after the first game for the organizers to inspect. The judging is affected by the painting level, basing and other hobby efforts, such as conversions and possible display solutions. The judging also gives credit to army's theme and its connection with the 40K background story. Players are given painting points as follows:

1: Good effort! The models count as painted and their bases have been finished.
3: Worth a handshake! The army is a nice, uniform entirety! There's a lot of effort and the troops look finished.
5: Commendation! The army turns heads and is exceptionally cool and noteworthy.

- Painted 40K army with its accessories such as wound markers
- Tactical Objectives deck and six numbered Objective Markers
- Dice, Templates, Rulebook, Codex, any other rules publications
- A tray that you can use to move your models between tables
- Lunch or cash
- 15€ to cover the tournament fee

Welcome! Torquemada Coteaz will be expecting you. 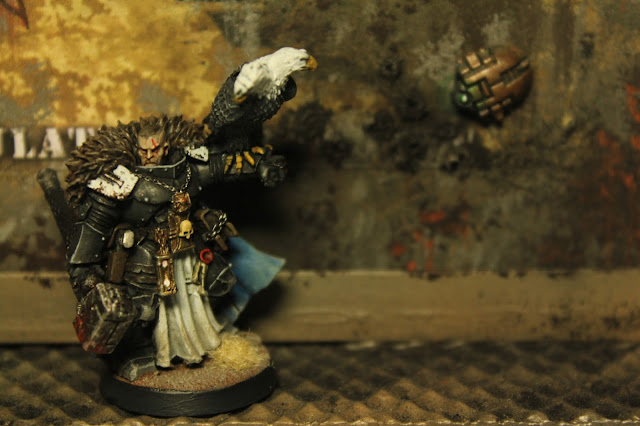