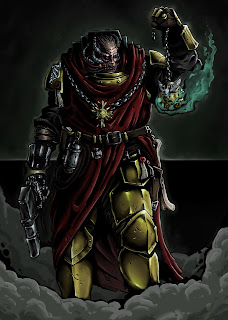 
Corrin Craterus was a promising junior officer from Atar-Median of Segmentum Pacificus, who was inducted into the service of the Imperial Guard by his noble family. To his great delight, the beginning of his officer career would be spent serving at legendary Lord Solar Macharius's side. The young cadet followed his renowned warlord-master for the majority of Lord Solar's last campaigns, gaining knowledge, passion and inspiration from the divine imperial commander. After Lord Solar's demise, his officer chamber went into mourning and much of his crusade army was disbanded to guard the thousands of star colonies Macharius had conquered. Seeing the embracing of Lord Solar's legacy as his destiny, Craterus pursued glory at the footsteps of his commander and mentor. He was determined to become the heir Macharius never had.


Lieutenant Craterus made his commanding debut at the defense of Ryza Secundus. His battle plans were solid and the Militarum phalanx he had formed had constructed fortifications of no equal in time for the invasion. As the big guns lighted up the night sky in the dawn of the traitor invasion, Craterus's eyes gleamed with the promise of zealous glory. But as the coming day turned into night, casualties piled up and the daemonic planetfall revealed its true nature, the resilience of his forces faltered. A breach after another weakened the Imperial battle lines and before long the war engines of the great enemy threatened the primary space port itself. The young warlord of the defending forces had to be dragged away from the command console by his headquarters staff. The city was lost and the Imperial forces were forced to retreat from Ryza Secundus.

Craterus's fall would continue. After the battle of Ryza he would serve temporarily as a naval officer in the Emperor's fleet, overseeing the gunnery operations of the Divine Invader. After weeks of patrolling in the deep space the cruiser and its escorts suffered an ambush raid in the hands of the strange and sophisticated machine-race of galactic north. The crippled cruiser just made it to warp space before the xenos could deliver the killing blow, but its entire escort retinue and millions of crew members were lost in the void. Devastated Corrin Craterus couldn't believe the xeno fleet had withstood his macro cannon batteries and relentless torpedo strikes. After all, everything had been prepared and executed as the brilliance of Lord Solar had once instructed.

The young Commander would return to Imperial Guard's service with desperate vigour. He would seek to lead the most difficult of campaigns, overseeing several sectors at a time and succumbing totally into the madness of the intergalactic warfare. His quest in reliving Lord Solar's greatest accomplishments and honoring his memory would leave dozens of worlds in ruin and lead to the death of thousands of soldiers. Craterus's foolhardiness and aggressiveness would bring him victories in several campaigns, which was enough to fuel his pride and hope for the ultimate conquest, but that was also frowned upon by some of his superiors. As time passed, his forces were no longer replenished, his armoury and supplies were restricted and Craterus was cut off to fight with resources far too narrow for the tasks at hand. This would lead the fanatic servant of the imperium to use unorthodox methods such as bionic field-augmentation, combat drugs, salvaged equipment and even xeno technology. Craterus even practiced dangerous superstition and was said to worship the gods of old, doing anything to give him a fighting chance in his service to the empire of man. As the years went by, Craterus would become unrecognizable to all but his closest servants, apart from his zeal and undying faithfulness to Lord Macharius's memory and deeds.

Today Corrin Craterus serves at the front lines of Armageddon's ground operations as commander of his regiment "Hounds of Hamartia". In the eyes of the echelon commanders he is viewed as a maverick and a pariah, whose veneration has diminished much below his current rank. Frankly, the hierarchy of the Imperial Guard weighs heavily on tradition and Craterus has been kept in service merely because of his presence in Macharius's organization long ago. Colonel Craterus's current missions are grim and almost suicidal, as he now serves at the helm of Armageddon's most desperate undertakings. Most of these are drop operations, which are known to kill half of the company's strength upon planetfall. However, all the commander asks is a chance to serve the imperium and his late master Solar Macharius, who hopefully watches over his old pupil from the side of the God-Emperor.