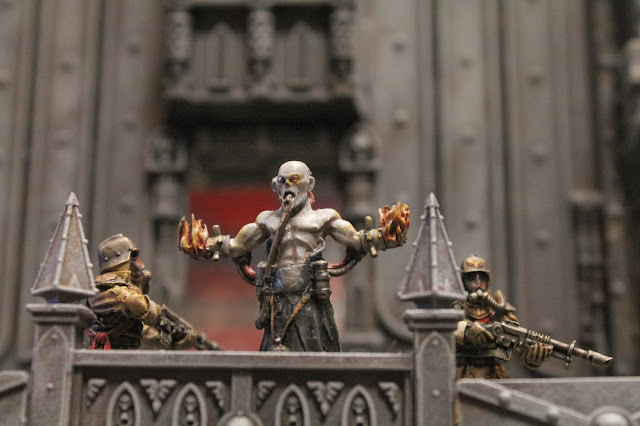 The sun was ascending. As its first, bright beams pierced the lingering dusk, the deserted cityscape threw long shadows upon the narrow, forsaken streets.

The vigilant guardsmen of the Death Korps stood guard in the ruins of a once-mighty cathedral surrounded now by equally torn ecclesiastic buildings. Imperial Sentinels returning from a patrol made their way around a pile of rubble, next to which a robust Leman Russ Exterminator flanked a marching infantry platoon. The vehicles' exhaust fumes rose to the heights, where more Kriegian grenadiers had established overwatch positions on the fortified rooftops. Though their resolve in duty and drills was ever so stern, their allegiance to ruinous powers was obvious judging by the defiled imperial symbols on their equipment and uniforms. As the twin doors of the cathedral balcony suddenly opened and the cause of this plague stepped forward, all the heads of the guardsman sentries turned to hail their master and commander. The presence of the dreadful Arch Heretic could be seen and felt a mile away.

This was all the overseeing Carcharodon Scouts needed to know in order to launch their attack.