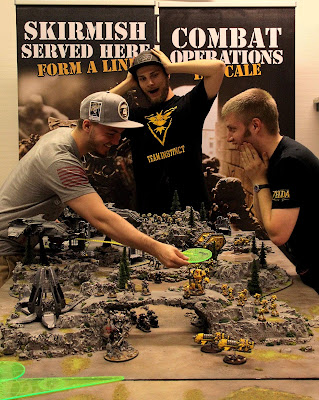 The War Head crew is passionate about Warhammer 40K, Classic Warhammer Fantasy Battle, historical wargames and visual arts. The entrepreneur, author and founder of the site is a wargamer whose interests also include cinematography, literature, chips and the National Hockey League.

War Head is both a hobby retailer and a tight-knit wargaming team. Our social media channels are a way for us to convey the passion and excitement of our hobby adventures, whether it's a scenery workshop, a long-planned battle or an exciting tournament journey. War Head is all about sharing experiences, interacting with fellow hobbyists and giving something back to the community - and to the dear hobby of ours.

War Head organizes tournament events, hobby meetings, participation battles and does commission work in painting single figures and armies as well as creating wargaming terrain for the use of companies and individual gamers. Our hobby experiences, work-in-progress pics and battle reports are documented here on our website.

Most of this blog is in Finnish but we are happy to discuss hobby matters in English as well. Easiest way to contact the crew is to email us at contact@gowarhead.com! You can also follow us on our Instagram and Facebook channel - the content is entirely in English.

Visual engineer, Sensei
Wargaming since: 2000
Trademark army: Tempestus Stormtroopers "The Crimson Lightning"
Current projects: 30K Dark Angels, Imperial Militia
"Eric is one of those dedicated artistic hobbyists who always have a new project bubbling under. In addition to concentrating in improving his Lord of the Rings miniatures collection, Eric is also a serious enthusiast in the historical wargames genre."

Waaaaghlord, Brute
Wargaming since: 2001
Trademark army: Greenskinz!
Current projects: Halflings for Moot Rebellion
"The biggest and most intense battles won't happen without Hese around. Always contemplating on a new campaign or a scenario concept, we've had countless of memorable skirmishes and mega battles together. Massive armies, massive fun!"

Hive Mind, Master of Darkness
Wargaming since: 2000
Trademark army: Hive Fleet Nostromo Alienids
Current projects: Talons of the Emperor
"A great addition to the War Head roster, Johannes has entered the active wargaming world again after a few on/off-years. Known for playing only movement and assault phases in 40K, this fluff purist is a valuable asset for the War Head field operations."

Juha
Mentor, Overlord
Wargaming since: 80's
Trademark army: Elysian Drop Detachment 77
Current projects: Necromunda and Bolt Action
"Juha is War Head's revered veteran and adds a pinch of historical spice to both of our games variety and the miniature collection. In addition to being known as a true fluff gamer and as the pioneer in Finnish Force on Force gaming circles, Juha has been recognized for promoting the historical wargaming hobby in the domestic scale."

Noa
Warsmith, Battle-brother
Wargaming since: 2006
Trademark army: Iron Warriors
Current projects: Horus Heresy Salamanders
"Noa is our long-time hobby pal and one of the creative actives of War Head's inner circle. Our most trusted tournament substitute has a collection of Perturabo's disciples for both 30K and 40K systems. Noa's vision for amazing scratch-built armies has begun to bloom during the recent years, paving way for projects such as Killa-Kult Mekanikus."

Ville
The Assembly Line, Sir Back Up
Wargaming since: 2007
Trademark army: Saim-Hann Eldar
Current projects: Horus Heresy Blood Angels
"Ville has to be one of the most energetic miniature painters in Finland, completing a detachment after another on an almost weekly basis. Some of his mini-projects are for gaming and some just inhabit cabinet shelves, but the hobbyist's drive to get stuff done is unrivaled."

This web site is completely unofficial and in no way endorsed by Games Workshop Limited.
All associated marks, names, races, race insignia, characters, vehicles, locations, units, illustrations and images from the Blood Bowl game, the Warhammer world, the Talisaman world, and the Warhammer 40,000 universe are either ®, TM and/or © Copyright Games Workshop Ltd 2000-2023, variably registered in the UK and other countries around the world. Used without permission. No challenge to their status intended. All Rights Reserved to their respective owners.